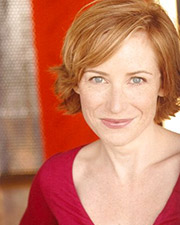 You fellas know full well what this badass mother can do!
Advertisement:

Karen Strassman (born June 5, 1966 in Washington, DC) is a woman who has a great variety of voices, starting from sweet, young and soft, to totally strict, to eerily evil, to breathily sexy. She's also pretty fluent in the French language. She also goes by two aliases: Kirsty Pape and Mia Bradly. She gained quite some fame when landed with the role of Kallen Kozuki.

Are these the tropes?