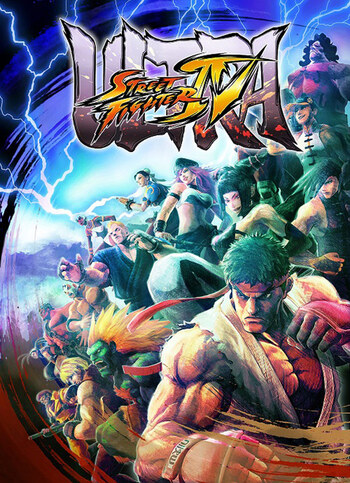 The weak lose and the strong win. How will you prove the old axiom?
"I don't care WHAT the critics say, violence is a beautiful thing!"
— Announcer
Advertisement:

The namesake game, Street Fighter IV, was announced in late 2007 (the series was 20 years old at the time, essentially making this a SUPER late Milestone Celebration), and the game was released in 2008 for arcades and in early 2009 for home consoles. Having been almost 11 years since the last numerical title's initial announcement, very few fans saw this coming, and jokes are still making the rounds about Hell's temperature having dropped to -3º Kelvin.

The title is 3D in graphic style, but continues the traditional staple of playing on a 2D frame. The producer Yoshinori Ono notes in interviews that he deliberately kept the game closer in style to Street Fighter II than its sequels.

The original twelve characters from the original Street Fighter II and Akuma returned, along with six new warriors: American spy Crimson Viper, French martial artist Abel, Mexican luchador El Fuerte, American acrofatic Rufus, Ryu and Ken's master and Akuma's brother Gouken, and the Big Bad Seth. The home console versions additionally included more returning characters from Super Street Fighter II (Cammy and Fei Long) and Alpha (namely Gennote who is actually from Street Fighter, but whose appearance is based on his Alpha series incarnation, with a few design alterations, Dan, Sakura, and Rose), along with the bosses being made playable. Gouken, Ryu and Ken's mysterious master, finally appears on-screen for the first time in the series.

In April 24, 2009, Capcom released an update for the game known as the "Power Pack" (a.k.a. the Champion Edition patch), which introduced the ability to save and upload replays to the Xbox Live or Play Station Network leaderboards, and a brand-new online-exclusive "Championship Mode," which allows players to participate in tournament battles.

The gameplay and character balance was also tweaked. It was released as a standalone title for the Xbox 360 and PlayStation 3 in late April 2010 as well as for Japanese arcades later, during the summer. The console release comes at a lower price than its predecessor, and there was a promise of "special features" for those who own the original Street Fighter IV, which turned out to be two alternate colors; a "heavy ink outline" color and a "sketch" color pattern both based on each characters' default color.

In addition, a port to the Nintendo 3DS titled Super Street Fighter IV: 3D Edition was released at the same time as the system; it contains the same roster as the console version of Super in addition to several features that take advantage of many of the device's new features.

Another port, this time to iOS, was released in March 2010, featuring a reduced character list which grew steadily with several updates, as well as a simplified control system that removed the light/medium/heavy attacks, replacing them with a four button system of punch, kick, focus and special. A followup named Street Fighter IV Volt was released in June 2011, further expanding the character roster and adding online play over Wi-Fi.

An arcade version of the game, aptly named Super Street Fighter IV: Arcade Edition, was released in late 2010; it features several balance tweaks and four new characters: Yun & Yang from Street Fighter III (who originally had a cameo in Chun-Li's intro cutscene for the original version and her ending in Super), Evil Ryu, and Oni. These four characters, plus numerous new features, were released as a DLC update for the console versions on June 7, 2011. A PC version of AE was released in 2011; as the PC did not get a regular release of Super, it marks the first time PC gamers could get their hands on all of the new fighters. In December 2011, Super Street Fighter IV: Arcade Edition Ver. 2012 was released as a free patch, updating the balance of the game even further. On January 23, 2013, Ono himself teased a possibility for a new version, and on March 22 said new version was officially green-lit by Capcom. They were taking suggestions from the community on balance changes for each character, as well as system changes.

At Evo 2013, Capcom revealed at their panel that the new version will include new balance updates, 6 new stages, and the four characters introduced in Street Fighter X Tekken who had yet to (re)appear in the IV series proper: Rolento, Hugo, Poison, and Elena. They also mentioned one new character who, they say, has never been seen in a Street Fighter game before, and will making their fighting game debut the update — who would later be revealed to be Decapre, the 12th member of M. Bison's Dolls (who was actually an NPC in Alpha 3). The debut trailer was shown before the Grand Finals for the Street Fighter IV tournament, revealing that the name for the new version would be Ultra Street Fighter IV. Like Arcade Edition, this is available as a download or a physical disc. The $40 disc version includes all DLC costumes, and downloaders can pay either $15 for just the upgradenote which is compatible with discs for both Super and Arcade Edition or $40 for the same content as the disc version. UDON Comics also designed new alternate costumes for every character. The costumes for the 5 new characters were a Pre-Order Bonus for those who reserve the retail version of the new game. Ultra would get a staggered release with the upgrades for PS3 and 360 released on June 3, 2014 (the early release date announced to allow Ultra to be used at Evo 2014); the console retail versions were later released on August 5, 2014; and PC version (both full and upgrade versions) was released on Steam on August 8, 2014. In October of the same year, this version received free DLC in the form of Omega Mode, which gives damn near everybody Rainbow Edition levels of brokenness and insanity. This mode is, according to Word of God, just for fun.

A sequel, Street Fighter V, was announced on December 5, 2014, coming exclusively to PlayStation 4 and PC.

Tropes Distinct To, Or Introduced In, This Game:

A NEW WARRIOR HAS ENTERED THE RING!