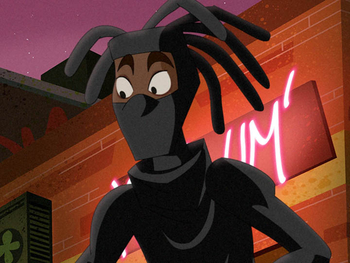 J.M.R., Germany: Are there Ninjas in Germany?
The Ninja: That forest didn't get black by itself.
— Ask a Ninja: Episode 60, Omniworld

Ninjas are cool. It's a simple, straightforward fact that, unless you are a pirate, seems to be universally recognized. They're also very, very Japanese. However, just as McDonald's came out of the United States and conquered the world, so the ninja have set up local branches all over the globe.

The McNinja takes advantage of the comedy potential inherent in the non-Japanese ninja. Imposing the "ninja" template on a different culture can result in anything from ninja-waiters to ninja-doctors... especially if you invoke a national stereotype or two.

It's also a convenient visible shorthand. Ninjas have a reputation for being killing machines with nearly supernatural stealth. Showing someone like this conveys the idea without the need to explain it. Plus, people tend to think a ninja suit is quite suited to sneaking about, unless you stand in plain sight. In real life... not so much. The traditional black suit of ninjas is actually horribly conspicuous, even at night. You want mottled grays for night stealth, solid black just silhouettes you. The "traditional" ninja outfit isn't even the traditional garb of actual ninjas, who would actually have worn the everyday clothing of some low ranking nobody who had business being where they needed to go. It's the traditional garb of Japanese stage hands and signalled to theatre audiences that they were supposed to ignore them. In some plays, one of the "stage hands" would suddenly jump out and shank someone — thus revealing themselves to be an actual ninja actually there to shank someone.

Sometimes it's implied or stated outright that ninja started in Japan, but have since secretly branched out; after all, what do a group based around infiltration and stealth care about national borders? This can be justified, however, if the ninja have moved to another country and then passed ninjitsu on to the locals. Something similar has happened before in real life: Japanese Judo was brought to Brazil in 1914, and developed into the style of Brazilian Jiu-Jitsu. Can also be justified if the McNinja learned ninjitsu from actual ninja manuals which they have (somehow) obtained.

Characters who are non-Japanese but explicitly were trained in ninjitsu by real Japanese ninja usually don't count as McNinja.

Fantasy worlds that have McNinjas might also be a case of Culture Chop Suey. McNinjas may also find a near-future home in Americasia.

A.K.A. Gaijinja, as a portmanteau of gaijin (meaning foreigner) and ''ninja'.

Compare and contrast Western Samurai in all aspects: also being a non-Japanese character as the McNinja; being a samurai, historical counterpart of ninjas; and being portrayed seriously instead of just for the Rule of Cool.

If we take Danny's word for it, he is a retired ninja champion. Specifically an Israeli-Caucasian Jewish-American Ninja who has since taken up singing and dancing as his career-choice.

If we take Danny's word for it, he is a retired ninja champion. Specifically an Israeli-Caucasian Jewish-American Ninja who has since taken up singing and dancing as his career-choice.