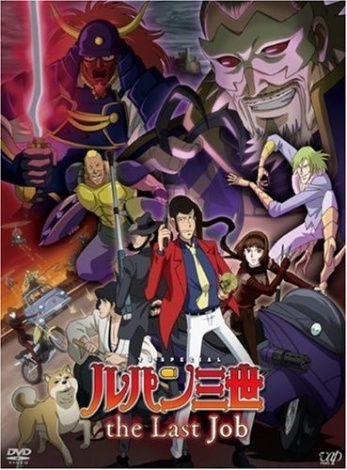 Lupin III: The Last Job is the twenty-first Lupin III Made-for-TV Movie. It was directed by Tetsurō Amino, who previously directed the Sweet Lost Night special. It originally debuted on February 12, 2010, and has yet to have an English language release. Rather appropriately given the special's title, and a bit sadly for long-time Lupin fans, this is also the last TV Special to feature long-time voice actors Gorō Naya (Inspector Zenigata), Eiko Masuyama (Fujiko), and Makio Inoue (Goemon).note  These actors' official last appearance came in the Lupin Family All-Stars short featured on the Master Files DVD, released the next year.

A lost cache of Hitler’s stolen plunder is discovered in Germany, and among the items is a gold avatar of Buddha. Inspector Zenigata is in charge of transporting it to Berlin because Lupin III has announced his intentions to steal the statue. Naturally, Lupin strikes, but he ends in failure when the sinister Morgana takes the treasure right out of his hands and adds insult to injury by killing Zenigata when the determined detective tries to get it back.

Lupin decides the best way to honor Pops' memory is to complete the job. Sure enough, the statue itself isn't the true item of value, but has something contained within that leads to another and greater find. Combined with a number of other rare items, it will help reveal the location of "Fujin," a lost artifact of great value. In Lupin's way is not only Morgana and his eccentric cronies, but a rogue ninja from the lost Fuma clan who is determined to get the treasure for her own purposes. Will Lupin honor Zenigata's memory properly, or will this be his own last job?