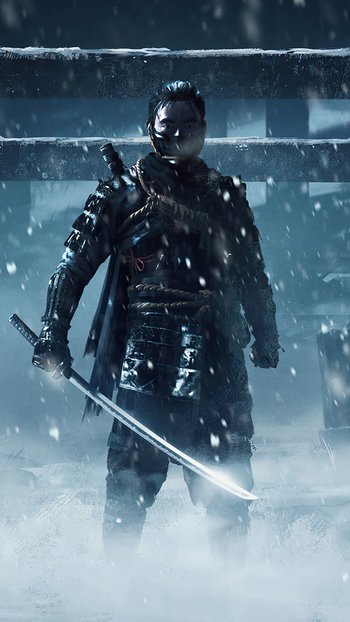 無償の日本人
Yoru: We all choose our own paths, Wayne-San! [Kyodai] walked a dark trail. It was not your responsibility. If you see Batman, tell him I have great respect for him.
Bruce: Why? He's as much a ninja as Kyodai was.
Yoru: Not so. Batman offered to help his adversary, and a lesser man would have used the knowledge of the [Touch of Death] against his opponent. Batman is the essence of samurai, Wayne-San. You would do well to remember that.
— Batman: The Animated Series, "Day of the Samurai"
Advertisement:

A character which blurs the line between samurai and shinobi, whether in design or behavior.

Samurai are like the Japanese equivalent of Knights; nobles from Blue Blood families trained to be warriors for their lords and Shoguns. They are carefully trained in ancient techniques that emphasize a sense of honor, preferring close combat in open venues. The Samurai follow a Code of Honor known as Bushido ("the way of the warrior"), a moral code that emphasizes chivalry and loyalty to a master, even if it cost them their lives or freedom. Exceptions to this one rule are called Rōnin, who still adhere to bushido but have no master to speak of.

Ninja (also known as shinobi) follow the code of Ninjutsu; a set of tenets and rules that emphasized survival and results. Popular belief state that the ninja sprang from peasant classes, utilizing weapons and techniques born from Mundane Utility with quick and decisive means of incapacitating threats. They were assassins, their targets often high-profile members of society that either posed a threat to the clan, to the people or were unfortunate enough to have a bounty put on their heads, often by samurai.

While historically ninja and samurai have a long and complicated relationship with one another, fiction likes to paint Ninja and Samurai as mortal enemies, one which represented the ruling class and the other which undermined it. The fact that many historical mountain/forest communities in the Sengoku period functioned as ninja clans or armed neighborhoods

, resisting against (if not partnering with) the dominion of conquering samurai (the most notorious being, understandably, Oda Nobunaga during the Tensho Iga War

) help reinforce this view. Both are warriors born from the same region (though definitions vary between provinces), so a lot of pop culture outside of Japan (and even sometimes within it) tend to confuse the two in a variety of ways. This is often done because combining the two looks cool. More justified examples have In-Universe reasons, born of desperate situations or one defecting to the other.

The Cyberpunk genre often conflated samurai and shinobi in their portrayal of (Japanese) Corporate Samurai: on the one hand, they are portrayed as stealthy, unstoppable assassins, while on the other hand, they are typically employed by a Mega-Corp and bred for Undying Loyalty to whatever clan owns it (or lack of one in the case of Street Samurai).

Sub-Trope of Ninja Pirate Zombie Robot. See also Samurai in Ninja Town, with which this can overlap.