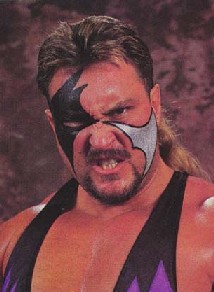 Brian Keith Adams (April 14, 1964 – August 13, 2007) was an American Professional Wrestler best known for his work for WWE as Crush and for WCW under his own name. He debuted in 1986 in the NWA Pacific Northwest Wrestling territory in Portland. He would go on to be a 2x NWA PNW Heavyweight Champion

. In 1990, WWE brought him in as Crush, the surprise third member of Demolition, who were the WWE World Tag Team Champions

at the time. After the team was broken up following WrestleMania VII, Adams went back to PNW and spent time in various independents until WWE brought him back in 1992. He was still Crush, but now he had a gimmick based on his growing up in Hawaiʻi and was a face. This lasted until Yokozuna squashed and injured him in 1993. He came back as a heel, having aligned himself with Yoko's manager Mr. Fuji and turned into a "Foreign" Wrestling Heel. Crush feuded with Randy Savage. In early 1995, WWE fired him after he was arrested for illegal gun possession and for purchasing steroids. He returned in late 1996, aligned with manager Clarence Mason as a member of The Nation of Domination. This lasted until June 1997, when Faarooq fired him, leading to Crush forming his biker gang the Disciples of Apocalypse. Adams left after, in the storyline, Kane injured him. In actuality, he left in protest over the infamous Montreal Screwjob. He went to WCW and joined the nWo. After accomplishing basically nothing for two years, he and Bryan Clarke were teamed up as Kronik and would go on to be 2x WCW World Tag Team Champions

. After WCW died, he and Clarke sat on the sidelines until, in the storyline, Steven Richards brought them in to WWE as part of the InVasion/Alliance feud and had them attack The Undertaker and Kane as revenge for how UT had accelerated the demise of Right to Censor. After a notorious stinker of a match at Unforgiven, Kronik disappeared. They would have a run in All Japan Pro Wrestling before retiring.