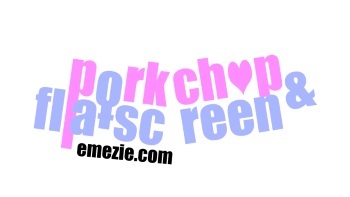 Strong is the new cute.
Advertisement:

Porkchop 'n Flatscreen! (aka PCFS) is a comedy/action cartoon series created by Emezie Okorafor. It centers on the too-serious Ninja Girl Mai and her best friend, the overweight ditz Ayane Shiun, as they attend the Maximus Institute of Texas and deal with the bizarre school antics that occur there. With pretty-boy angel Bobby Sykes, resident Alpha Bitch Mina Kim and her posse, the local gang known as the Krunky Punks, and the out-of-this-world Mouse, this won't be easy.

Now has a spin-off series called "Chubby Mermaid", the premise of which has Ayane making a fanfic where she's a mermaid.

There is now a character page under construction.