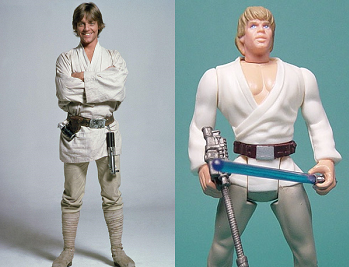 Luke only gets like this when he sucks his gut in.
Advertisement:

Sex Sells, and thus when adapting a work from the page to the screen, executives often feel that, in the interest of attracting more moviegoers, certain liberties can be taken with casting. And thus, a character described as scrawny or flat-chested in a novel might magically become muscular or buxom in the film based on that novel.

May overlap with Adaptational Attractiveness, though there's no guarantee that the bustier actress or more muscular guy is necessarily more attractive. May also be a result of Dawson Casting or an Age Lift. Male examples of this trope often go hand-in-hand with Adaptational Badass. When fan artists do this, it can be a case of Self-Fanservice. If this happens gradually within the same series, see Fanservice Pack.