Anime / The Wizard of Oz 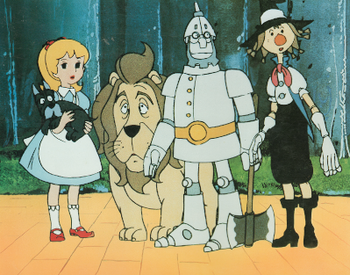 Advertisement:
The Wizard of Oz is a 1982 Animated Adaptation of L. Frank Baum's The Wonderful Wizard of Oz. It's a feature film produced by Toho and Wiz Corporation, directed by Fumihiko Takayama, written by Yoshimitsu Banno and Akira Miyazaki, and animated by Topcraft (which later became part of Studio Ghibli), with music by Ghibli's later go-to composer, Joe Hisaishi.

The story follows a young girl named Dorothy Gale as she travels through the magical land of Oz, trying to find her way back to Kansas. While there, Dorothy befriends various inhabitants on her adventure.

Unusually for an anime, the film was released first in English in the United States, with Aileen Quinn as Dorothy and Lorne Greene as the Wizard, and was a staple on U.S. cable and syndicated broadcast television during the '80s. The Japanese dub (featuring Mari "Lunlun" Okamoto as Dorothy) wasn't released until 1986. It's also one of the few directorial credits for Takayama, who is best known for Mobile Suit Gundam 0080: War in the Pocket and generally wrote for and directed sci-fi or giant-robot shows such as Super Dimension Fortress Macross.

Not to be confused with the 1986 anime adaptation The Wonderful Wizard of Oz, which was also written by Miyazaki.