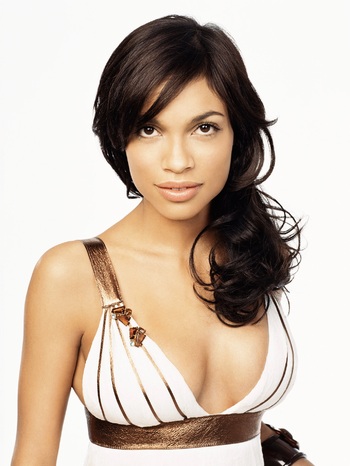 "You only live once. You don't want your tombstone to read: 'Played it Safe'."
Advertisement:

Dawson made her film debut with the controversial 1995 teen drama Kids. Her subsequent film roles include Men in Black II, Sin City, Clerks II, and Death Proof, Alexander, The Rundown, and RENT.

She joined the Marvel Cinematic Universe as Claire Temple, who appears in all of the franchise's Netflix series (minus The Punisher, and not for a lack of trying), in roles ranging from a single episode of Jessica Jones to a major cast member in Luke Cage. Her other famous live-action television role is the adult version of Ahsoka Tano from Star Wars since Season 2 of The Mandalorian.

Dawson has been in a relationship with U.S. Senator (and one-time Presidential candidate) Cory Booker since 2019. She came out as LGBTQ

Not to be confused with either a rosario-wearing vampire or a certain creek.