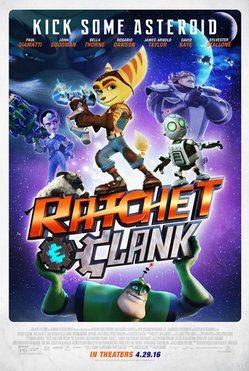 The movie, based on the game.
Ratchet: So what do I call you?
Clank: I suppose my proper designation is... (Clank's torn arm begins clanking) ...warbot defect B5429–
Ratchet: Maybe I'll just call ya...Clank.
Advertisement:

Released April 29, 2016 from the newly-resurrected Gramercy Pictures, Ratchet & Clank (and Captain Qwark) make their big screen debut, in a movie reimagining of the first game in the series. Insomniac Games served a big role in its production. The initial screenplay was by TJ Fixman, the writer for Ratchet & Clank Future: A Crack In Time, but the final script was heavily rewritten by Kevin Munroe (who directed the film) and Gerry Swallow.

This time around, Ratchet's lifelong dream is to join up with the great Captain Qwark and the Galactic Rangers, thinking he "has what it takes." After being told the exact opposite of that phrase by Qwark himself, Ratchet is then a witness of a ship crash. Investigating the crash, he comes across a willful robot he dubs "Clank". Clank informs Ratchet that he seeks the aid of the Galactic Rangers to thwart a heinous plot by Chairman Drek involving the destruction of innocent planets. Realizing the two of them have the same goal, Ratchet aids Clank in his quest, while getting his dream to come true at the same time.

A game was released on the PlayStation 4 as a tie-in with the film, leading people to believe that the film is a reboot of the franchise, though the developers insist that it's a re-imagining rather than a true reboot.

Look, I workshop thousands of these tropes a year, and they can't all be gold!

The Plumber: ... Are you still here?! All the tropes and doohickies already went by. That means it's over! Move along, no extra little bit at the bottom of the page! Oh, if I find out who started this nonsense, why, I'm gonna plant my boot so far up - I said, BEAT IT! Sheesh...

Example of:
Came Back Wrong