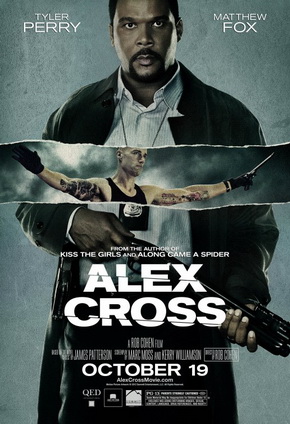 Don't cross Alex Cross.
Picasso: Confucius said, "When setting off on a path of revenge, dig two graves."
Alex Cross: That's fine with me as long as you're in one of them.
Advertisement:

Detective and Forensic Psychologist Alex Cross investigates a gruesome murder and while his partner thinks it's the work of a psycho, Cross thinks it's an organized person. He eventually discovers he has another target and Cross figures out who it is and stops the killer before he gets him. The killer named "Picasso" retaliates against Cross directly and Cross vows to get him as he decides to break all the rules to do so.

This is the third feature film featuring the character of Alex Cross acting as a Prequel/Continuity Reboot. While in the previous films, the role was portrayed by Morgan Freeman, in this film the role is portrayed by Tyler Perry.