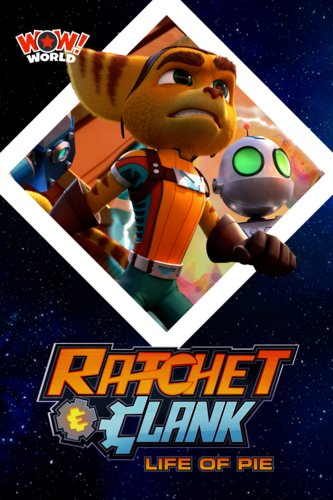 Get your OmniWrenches ready!
Ratchet: And I believe I heard someone say free pizza!
Clank: Yes. I have accumulated the precise amount of coupons for one free Cosmic Crust pizza!
Advertisement:

Ratchet & Clank: Life of Pie is an animated short based on the Ratchet & Clank series and animated by Mainframe Entertainment, the same studio behind the 2016 movie.

Presumably taking place sometime after the events of the film, Ratchet and Clank go on a trip to get a free pizza with the coupons Clank has collected. However, tension quickly begins to grow between the two once its revealed that the coupons are for a Cosmic Crust Pizza, which Ratchet has a strong dislike for. Their debate gets interrupted when they accidentally come across Dr. Nefarious' space station, where he is unveiling his latest invention: The Portalizer, which allows him to open portals into other dimensions. Seeing this as an opportunity to get better pizza from a "pizza dimension," Ratchet steals the Portalizer for himself. From there, things take a turn for the cheesier, meatier, crustier, and the worse.

The short was released suddenly on February 12th, 2021 on the Canadian streaming service Crave, with no word on a worldwide release.

The tropes have more flavor than the pizza!