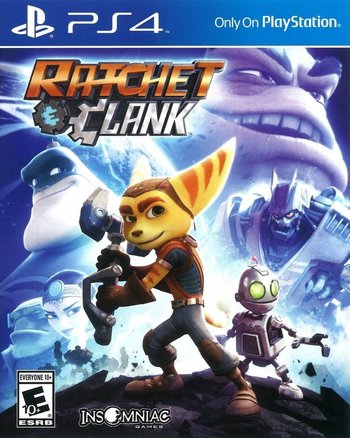 Ratchet & Clank is the eleventh Insomniac-made Ratchet & Clank game (and the fifteenth counting all the others), and it's a reimagining of the first game in the series set within the story and world of the 2016 movie. The levels explored are mostly the same as in the original game (though with some additional content and missions), but the plot is based on the film and it features weapons from later games. To put it simply, it remakes the original game when it isn't adapting the movie.

Because the story is based on and expands that of the movie, they share many of the same tropes.

It is available on the PlayStation 4 and was released on April 12, 2016, a few weeks before the film it was based on. It should be noted, however, that this game is not a Continuity Reboot of the franchise, as confirmed by Insomniac here

, along with the existence of later game Ratchet & Clank: Rift Apart.

You've got a thing for tropes, don't ya?