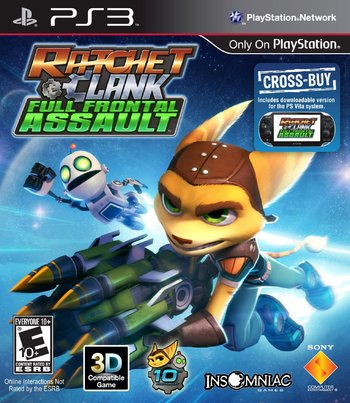 The Ratchet & Clank series' second downloadable title, celebrating the series' tenth anniversary. Much like its predecessor, it can be played solo or with a friend. Though advertised as going back to the core gameplay, a new twist has been added in the form of Tower Defense elements. The plot centers around a series of Planetary Defense Centers across the galaxy that have been breached by a terrible foe from the series' past, putting said galaxy— and its inhabitants— in danger.

While, like Quest for Booty, the game was originally set to be download-only in North America, it's been set to receive a physical release as well as its original digital release in all regions. This is the first title in the franchise to be released on Play Station Vita (as well).

Not to be confused with Full-Frontal Assault, an entirely different matter.

Oh, boy! Not a good time to run out of tropes!