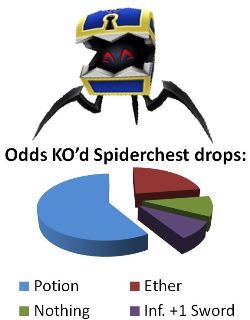 A gameplay mechanic used principally to give a sense of reward to the players by assigning enemies a list of items you might gain if you defeat them. These items are called "drops" because the foe drops them when they die, and there's a probability table assigned to each item the enemy can drop — "Okay, 30% of the time you get a Potion, 5% you get a Red Shield, and 3% you get Cod Liver Oil" — which is where the "random" comes in.