Video Game / Revenge of the 'Gator 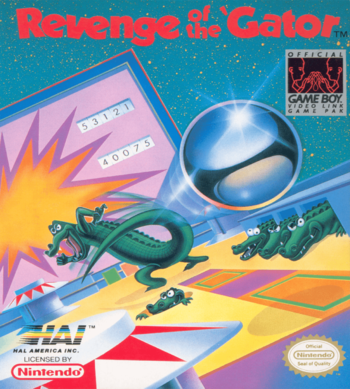 Revenge of the 'Gator (original title: Pinball: 66 Hiki no Wani Daikoushin, ピンボール 66匹のワニ大行進) is a video pinball game for the Nintendo Game Boy. It was created by HAL Laboratory and released in 1989.
Advertisement:

The game itself is a quest to reach a high score on a four-screen-tall playfield populated with various alligators. Shoot the targets and alligators to move from one screen to another, activate the ball savers to extend your game time, and go for the bonus rooms to score more points. One or two players can play on a single Game Boy, or two units can be connected for head-to-head play.

Revenge of the Gator is fondly remembered by many for its charming whimsy and fast action, making it a hallmark of the original Game Boy library. Many of the gameplay elements would be later reused in Kirby's Pinball Land.

Revenge of the Gator demonstrates the following tropes: