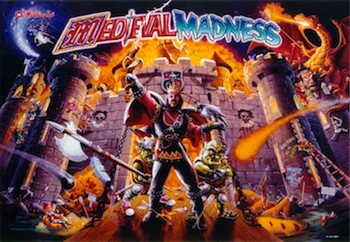 "I am the King of Payne! Welcome to my realm!"note Among other opening phrases, including two by other characters
Advertisement:

Medieval Madness is a Williams Pinball machine designed by Brian Eddy, with artwork by John Youssi and Greg Freres, and released in June 1997. The player must defeat six enemy kings and their castles, ending the tyrannical rule of the King of Payne. This is done by visiting each castle, hammering its drawbridge, then breaking open the front gate and storming in.

Along the way, the player will also fight dragons, rescue maidens, participate in jousts, and rally angry peasants. Two trolls will periodically pop out of the playfield to menace the player, but Merlin the wizard is nearby to help. It's all Played for Laughs, with clever writing by Scott Adsit and Kevin Dorff of Chicago's Second City.

In 2013, Rick Bartlett of Planetary Pinball Services announced plans for a Limited Edition rerun of Medieval Madness, with improvements including a better sound system, built-in support for LED lighting, double hard coating, and a shaker motor. The one thousand units sold out in less than three hours, prompting him to announce plans for a standard edition several days later. A partnership was reached between Planetary Pinball, Chicago Gaming Company, and Stern Pinball to assemble the remakes, and they were delivered in March 2015.

A digital version of the game was available as part of FarSight Studios' The Pinball Arcade collection until July 1, 2018, when their license to all Williams and Bally tables expired. However, on September 4, 2018, Zen Studios announced that it had gained the rights to this and other WMS tables to be released within Pinball FX3. In particular, this and three other tables (Fish Tales, The Getaway: High Speed II and Junk Yard) were the first to get this treatment.

They took our tropes!: