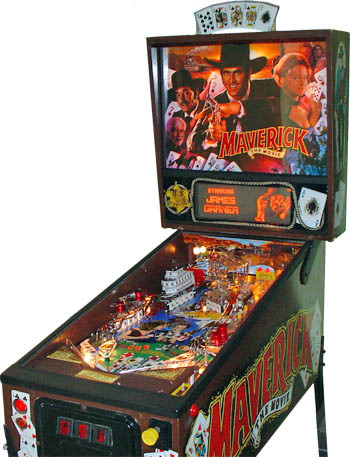 Ante up!
Commodore: "Welcome to my ship, the Lauren Belle, and welcome to the first ever Annual All Rivers Draw Poker Championship! We play 'till we drop, winner takes all!"
Advertisement:

Maverick The Movie is an arcade pinball game based on the 1994 Western comedy film starring Mel Gibson. Designed by Tim Seckel with artwork by Morgan Weistling, this was the last game from Data East's pinball division before it was sold to Sega.

In this game, the player is a Professional Gambler riding aboard the Lauren Belle, trying to get into the All Rivers Poker Championship. After the deal, knock down the flashing drop target bank to beat the table's hand and build up your poker chips. Draw carefully to avoid needless discards, raise your bet if you're feeling lucky, or fold your hand if you're getting cold feet. Between rounds of poker, play some blackjack, collect Coop's Cash, or take a walk around the Belle, but look out for Angel's Revenge, the runaway Stagecoach, and the Bank Heist. If you can collect enough chips for the entry fee, enter the Championship, then try to keep your cool and take the Championship Pot.

Maverick tends to leave players divided. Fans praise its emphasis on careful shooting and aim, noting that the ability to raise, discard, and fold makes it feel closer to Real Life Poker than most pinball card games, making for a fully-featured table garnished with rich music and beautiful graphics on the oversized display. On the other hand, critics complain about the slow pace, the dull brown colors, and Mel Gibson dominating the lackluster backglass.

Dealer: "You lost that hand, partner."