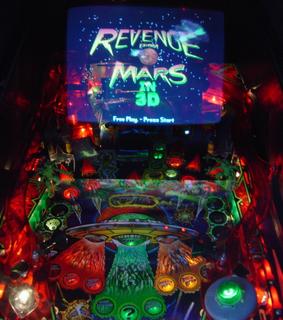 Revenge is sweet.
"Forget everything you knew about pinball. This is something entirely different. Entirely better. It's Revenge From Mars, the first-ever game to utilize the technology of Pinball 2000."
Advertisement:

Revenge from Mars is the sequel to Attack from Mars, released in January 1999 by Williams Electronics (being the final pinball game released under the Bally label). It was designed by veteran arcade game creator George Gomez, whose previous Video Games include Spy Hunter and TRON, with artwork by Greg Freres and John Youssi, and programming by Keith Johnson.

It was notable for being the first of the two ill-fated "Pinball 2000" games (the other being Star Wars Episode I), which utilized digital graphics projected over the playfield to create an interesting psuedo-3D illusion of immersion. The format of the game is also different from its predecessor: you are given a choice of nine missions in three categories to tackle.

The making of the game is profiled in the documentary Tilt: The Battle to Save Pinball