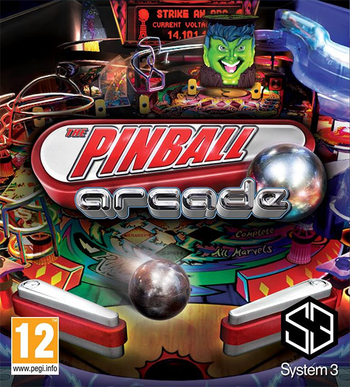 is a digital pinball game by FarSight Studios, a successor to their earlier Pinball Hall of Fame titles. Unlike most digital pinball games which feature original tables, The Pinball Arcade is a platform for downloading and playing emulated versions of famous Physical Pinball Tables from Bally, Gottliebnote Either David G. or Alvin G., Stern Pinball, Williams Electronics, Sega,note Released under Stern Pinball and Data East.note Also released under Stern Pinball Each one comes with a full set of rules, production trivia, and operator controls; players' scores are shared for online leaderboards and tournaments.

The predecessor titles were Pinball Hall of Fame: The Gottlieb Collection (2004) and Pinball Hall of Fame: The Williams Collection (2008). These were developed by FarSight and released by various publishers for the Sixth Generation of consoles, (Nintendo GameCube, PlayStation 2, Microsoft Xbox) and Nintendo's Wii. As the names suggest, each title was a collection of six to twelve simulated pinball machines from Gottlieb & Co. and Williams Electronics, and included unlockable features, table histories, and achievements.

The Pinball Arcade was first released for iOS and Android mobile devices in 2012 with four titles available: Tales of the Arabian Nights (Williams), Black Hole (Gottlieb), Ripley's Believe It or Not! (Stern Pinball), and Theatre of Magic (Bally). Additional versions for Xbox Live Arcade, Play Station Network, OS X, Microsoft Windows (on Steam), Wii U, Nintendo Switch, and Amazon Kindle were released afterward. Versions for the Nintendo 3DS and Linux have been planned, but as of May 2016, they seem to be in Development Hell.

If you're living outside the US, however, don't expect to be able to find the game in your country's Xbox Live Arcade or Play Station Network- it's No Export for You in some markets where said online stores are concerned. Thankfully, the PC, iOS and Android versions are truly available worldwide.

Pinball tables are rendered as real-time 3D models, allowing for dynamic camera changes to follow the action. And while the game uses a common framework to play the tables, FarSight uses the actual physical machines for reference, tweaking the behavior of each emulated title to more closely match the real thing. The Pinball Arcade allows all tables to be played for free up to the game's lowest high score. As a further enticement, FarSight also makes one table free to play each month, supported by advertisements.

Almost all of the digitally recreated tables are available for all versions of The Pinball Arcade.note The planned Nintendo 3DS version only featured non-emulated electro-mechanical tables and tables using numeric displays and early alphanumeric displays and would have been released under a different title; the Xbox 360 version had the newest releases delayed due to the publisher's bankruptcy in 2012. In 2013, both the DLC and the game was delisted from said version, and was finally re-released on May 11, 2015 with nearly all tables ever released up to that point.

In December 2015, a spin-off titled Stern Pinball Arcade was released. A collaborative effort between FarSight and Stern Pinball, it provides digital versions of Stern's library from 2000 to the present.

On May 7, 2018, FarSight Studios released an official press release

stating that their contract for the Williams and Bally tables was not offered an extension; the rights to these tables are now officially held by Zen Pinball (announced on September 4, 2018)

. As of July 1, 2018, all tables previously released under the Williams and Bally labels are no longer available for The Pinball Arcade. The Nintendo Switch version, having been released around the time of FarSight's announcement, is limited to tables from the Gottlieb and Stern lineages.

Not to be confused with Microsoft Pinball Arcade, released in 1998 for PC and 2001 for Game Boy Color. Coincidentally, both games feature Haunted House and Cue Ball Wizard, both of which are Gottlieb titles.

The following pinball tables are available (or have been announced) for The Pinball Arcade (in alphabetical order):

The following tables were originally featured for The Pinball Arcade, but are no longer available due to the expiration of any licensesnote but can still be re-downloaded by those who purchased their copies beforehand:

The following tables are available (or have been announced) for Stern Pinball Arcade:

The following pinball tables are available previously on the Gottlieb and Williams Collection releases, but have not been made available for The Pinball Arcade (in alphabetical order):