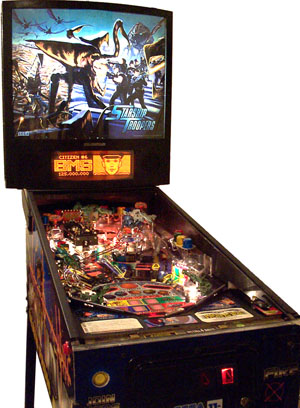 Honor - Glory - Survival
"Come on, you apes! You want to live forever?!"
Advertisement:

Starship Troopers is an arcade pinball game based on Paul Verhoeven's film adaptation of Robert A. Heinlein's sci-fi novel. It was designed by Joe Kaminkow and Joe Balcer, illustrated by Morgan Weistling, and released by Sega Pinball in 1997.

The pinball table casts the player as a member of the Mobile Infantry, who must visit six planets and kill all of the Arachnids in the Federation's Bug War. Blast the Warriors, Plasma Bugs, Hoppers and Tankers to secure a planet, then try to capture the Brain Bug before it escapes. Secure the planet and then advance to the next, or Arm the Nukes and Nuke 'em instead. Practice your gunnery skills on the Live Fire Assault Range, perform Recons for various awards, then use the right Mini-Flipper to score Double Kills and Advance In Rank. Survive long enough to make your way to Klendathu, then kill all the Bugs and Double Nuke them all to extinction.

Starship Troopers is often overlooked by players both due to its license and Sega Pinball's small marketshare. Most of those who've played the game consider it one of Sega's best tables, with fast flow, nonstop action, and lots of bombastic bug-blasting fun. The biggest drawback is the weak sound system, as Sega equipped the table with only one speaker to cut costs. Not surprisingly, adding a second speaker is an easy and popular modification for owners.

Additionally, downloading the Pinball Arcade version will upgrade the entire collection's rating to a "T" (13 and up) rating.

Reporter: Do you want to know more?