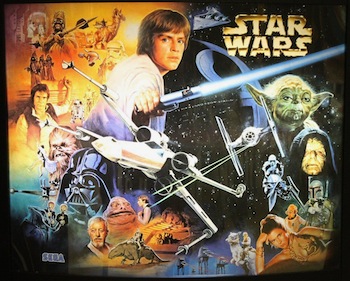 "The Force is strong with this one."
Advertisement:

Five years after Data East's own table, Sega Pinball returned to the galaxy far, far away with Star Wars Trilogy, released at the same time as the Special Edition of the original films. Designed by Joe Kaminkow and Joe Balcer with artwork by Morgan Weistling, the game came out in March 1997 just as the Special Editions finished playing in theaters.

The most prominent features of the playfield are the spaceships, with the player's X-Wing facing off against Vader's TIE Advanced; a turbolaser turret fires between them, while a frozen Han Solo sits on the lower-right side. There are six tasks that the player must complete, such as scoring various jackpots, performing heroic deeds, and thawing Han from the carbonite. Only then can the player confront Darth Vader by loading a pinball into the X-Wing, knocking down his phalanx of TIE fighters, then scoring a direct hit on his ship. Use the Force to light the jackpot and try for the Millenium Falcon's multiball, but be prepared to test your knowledge of Star Wars trivia. Operators could add extra visual appeal by choosing a 3D lenticular backbox print instead of the standard one.

Fans are divided over whether they prefer this pinball or Data East's table. Proponents of Star Wars Trilogy speak of its uncluttered playfield, more balanced gameplay, and fun toys. The biggest flaw for this pinball is arguably its reliability, as a number of owners will point out problems with loose parts and unreliable mechanisms that require frequent maintenance.