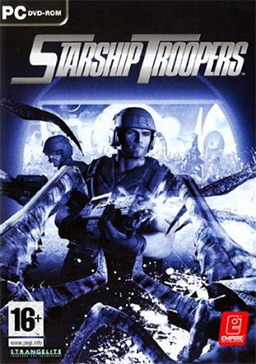 Marauder, welcome to the first day of the rest of your war.
"Hey, Marauder!"
— All of the AI "grunts"
Advertisement:

Starship Troopers is a 2005 video game based on Paul Verhoeven's (not-so) adaptation of Robert A. Heinlein's novel.

Five years after the movie, the Arachnids have taken over the planet of Hesperus, and it's up to the player, Marauder 06, to help the Mobile Infantry retake the planet. Along the way players will fight against many castes of Arachnids, from both the movie and the TV series.

Like Deus Ex: Invisible War, this is one of those games that gets picky about its hardware; it is designed to run on Windows XP and Windows XP only, though this can be solved using compatiblity mode. And then there's the video card compatibility issue. With some tweaks, this can be solved too, though this results with very, very severe Special Effect Failure in-game.

Not to be confused with Starship Troopers Terran Ascendancy.