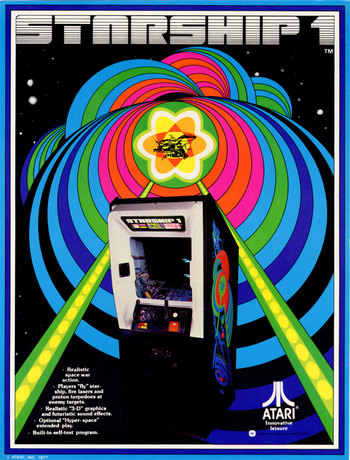 Starship 1 is an Atari Arcade Game from 1976. It's a space First-Person Shooter, with all the Star Trek references that Atari could get away with in those less copyrighted days. You fly through hyperspace, dodging planets and asteroids and shooting enemy spaceships. You can line them up in your crosshairs and shoot them with phasors, or fire one of your five proton torpedoes and destroy everything on the screen.

There are four types of enemy ships, worth between 50 and 500 points. One is obviously the Enterprise, one is a Klingon warbird, one is a Flying Saucer, and one looks like a cat sticking its tongue out at you (!) Score 3500 points and you get 30 seconds of extra fuel. The game ends when you run out of fuel, there are no lives lost if you crash into planets or enemy ships.

It had a loose Atari 2600 adaptation called simply Starship.