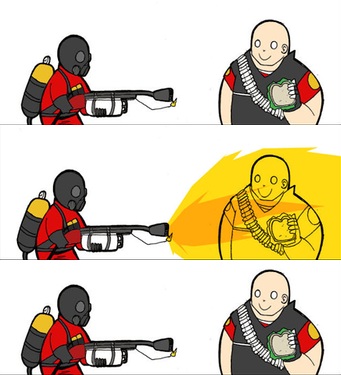 Heavy and Sandvich both passed their Spy Check. note Unfortunately, this means Sandvich can't be toasted.
Dorian: Cole, you should be careful dancing around with those daggers when I'm throwing fire.
Cole: It won't hurt me. It's friendly fire.
Dorian: That doesn't always mean what you think it means.
— Dragon Age: Inquisition
Advertisement:

You're playing a video game, and you get to the epic battle where it's your team against the enemy team that has ten times as many members as yours. But you have a secret attack in store for them: one that engulfs everything on the field in flames for massive damage. Your team is victorious! Hold on... everything? If it was that far-ranging, then why are your team members standing unhurt with only the scars they gained from enemies, and the grass with every blade untouched?

Just call it immunity against friends' attacks. Perhaps The Power of Friendship becomes a tangible force in combat that can be used as a shield against friendly firepower, accidental clicks on them instead of the opponents, and toxic, wind-spreading spells cast a foot away from them. A shield so flexible that it can also protect any surroundings and landscape formations from harm. This makes it easy to focus on the enemies alone, as you know that you can pull out bombs, poison, Dangerous Forbidden Techniques, the like against them; so long as the Evil Minions don't touch you, your friends will be perfectly fine.

This is largely an Acceptable Break From Reality because it'd be cumbersome to hold off your team's strongest attacks for fear of blowing one of your members up if it's not easy for them to take cover. It could also be considered as keeping you in-character; the person you're playing as wouldn't shoot their squadmates, so giving the player that ability would be a matter of Gameplay and Story Segregation. This also overlaps with Story-Driven Invulnerability: being allowed to kill your plot-critical allies, or turn them hostile, would wreak havoc on the storyline. Still, it can get ridiculous at times, as some of the examples below testify; this is especially true if you are allowed to kill civilians or other friendly targets (including yourself), and only your squadmates are immune to your idiocy.

Many players of multiplayer shooters also have friendly fire turned off in a desperate measure to prevent griefers from team-killing, which of course results in unthinking, indiscriminate spamming of machinegun fire and high explosives into mixed groups.

Less common in Real-Time Strategy than in other genres where individuals are less disposable.

Prevents Friend or Foe becoming an issue, as well as needing an Arbitrary Minimum Range when shooting near allies. Sometimes implemented as Anti-Trolling Features. Subtrope of Damage Discrimination.

See also Invulnerable Civilians. Not to be confused with Insult Friendly Fire.

Therese demonstrates her Jewel Magic Powers when taking down a group of Karma Penguin Familiars after Naofumi draws their attention to him. The Spell doesn't just stop at not hurting him; but it also removes the lingering Curse he's been under the effects of earlier.

Therese demonstrates her Jewel Magic Powers when taking down a group of Karma Penguin Familiars after Naofumi draws their attention to him. The Spell doesn't just stop at not hurting him; but it also removes the lingering Curse he's been under the effects of earlier.