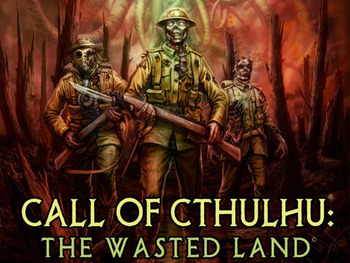 Call of Cthulhu: The Wasted Land is a Turn-Based Tactics Indie Game with RPG Elements, released on January 30th, 2012 for the iOS and Android, and then on Microsoft Windows PCs on May 5th, 2012. The game has been developed and published by Red Wasp Design with the collaboration of Chaosium, hence it is part of the Call of Cthulhu license.
Advertisement:

The game is set in 1915 during World War I, on the Western Front. It follows a squad of six British soldiers and investigators sent behind German lines by the MI-47, a shadowy British Intelligence agency, in order to put an end to a German plan involving dark magics to turn the tide of the war. Soon after the beginning of the mission, they begin to encounter undead abominations and unspeakable monsters...

The starting party members note  this team is complete when level 4 begins are the following:

Some eventually lose their Hero Must Survive status the further you go in the campaign. They can be replaced by other generic British soldiers hired between levels.

The game is turned-based, with an action points system (each character has his own action points amount which is drained by each action; moving spends less points than fighting; when it is too low, he can't do anything until the next turn). The map is divided in squares (each character fits in one square). Among the RPG elements, each characters has a sanity meter, which is slowly drained when meeting monsters or casting spells; running out of SAN has interesting effects (although it can be regain onf the field).

In the end of 2012, Call of Cthulhu: The Wasted Land received a DLC Expansion Pack named Kaul's Diary, which is a prequel of the game during which you play as Kaul and his German cultists.

Here is a link to the official website of the game

, which also include World War One and Lovecraft-themed articles, articles about the game's creation, some tactical advices, and a walkthrough of the initial campaign.

For more tropes about the settings, see also Cthulhu Mythos, Call of Cthulhu, and World War I. The game is not supposed to be a Crossover between Cthulhu Mythos and T. S. Eliot's The Waste Land.

Call of Cthulhu: The Wasted Land provides examples of the following tropes: