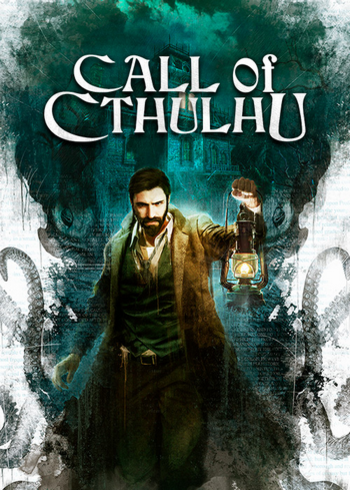 "In his sunken house at R’lyeh dead Cthulhu waits dreaming..."
"Sanity is a curse. The only freedom... is madness. Cthulhu Fhtagn..."
— Narrator
Call of Cthulhu: The Official Video Game is a Survival Horror Adventure Game Role-Playing Game developed by Cyanide Studio and published by Focus Home Interactive. It is set in the Cthulhu Mythos, and is a loose adaption of Chaosium's Call of Cthulhu Tabletop Roleplaying Game.

Edward Pierce is a private investigator who is hired by wealthy industrialist Stephen Webster to travel to Darkwater Island to investigate the death of his daughter, Sarah Hawkins, and her family in a fire. His investigations soon tell him that there is much more to the case than meets the eye and that the locals of the island are hiding dark secrets from him. As he investigates, he will have to deal with horrors that threaten his life and his sanity.

The game was released on October 30, 2018 for the PlayStation 4, Xbox ONE, and PC through Steam.

Call of Cthulhu contains examples of the following: