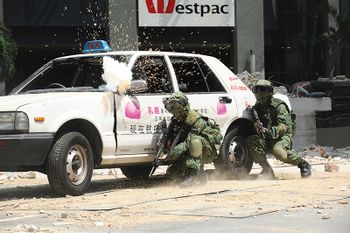 Get behind something!
Marcus Fenix: Mine says "Teach the rook the Golden Rule".
Ben Carmine: Oh, I know. Do unto others as you would have-
Marcus Fenix: Not out here kid. Golden Rule of the Gears is: Take cover or die.
— Gears of War 2
Advertisement:

For a long time, video game protagonists either relied on dodging if they were One Hit Point Wonders, or simply soaked up the damage if they were Made of Iron. Taking cover was certainly possible, but it simply consisted of stepping behind walls.

Then the system changed. Cover and systems for using it effectively have become automated to an extent. The first examples of formalization like this in First and Third Person Shooters were "duck," "lean left" and "lean right" keys present for quick peeks and potshots, often inherited from Stealth Games. Pressing a button causes your character to press up against nearby objects, sidle left and right along them, and peek around corners. With another button, one can either fire blindly, or expose oneself to rapidly aim and shoot. A third person shooter with a cover system is a member of the "cover-based shooter" sub-genre.

Many cover systems exaggerate the safety of cover by allowing the player to see around corners the character can't (some first person games even jump to a 3rd-person camera when sidling against cover for this reason,) allowing them to pre-aim or designate targets from behind cover, rendering them invisible to enemies while they lean around corners, or even letting them fire aimed shots from behind cover. In essence, this is an inversion of Behind the Black.

Games based on this trope are guaranteed to be full of waist-high obstacles to duck behind, no matter what environment you're in, and they're all inexplicably bulletproof.

In a strategy game, Geo Effects might provide a defensive bonus for units in cover, or Garrisonable Structures for infantry to use as cover. See also Corridor Cubbyhole Run, a favorite level design choice for a cover-based shooter; and Die, Chair, Die! for destructible objects, which might be good cover exactly once. And please, don't try to take cover behind the random barrels of explosives. Using a person as cover is its own trope.

While not a new concept (as certain games are made so tough you want to find a barrier between you and your enemy even if you don't have a formalized cover system), the wild success of Gears of War led to its replication in a long series of what are effectively Follow the Leader games. It's basically RPG Elements for gaming, and a reflection of changing tastes.