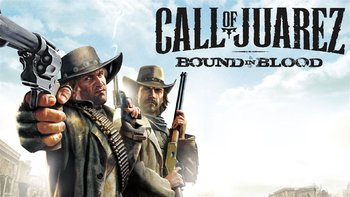 "Yesterday, we were a family..."
Advertisement:

Call of Juarez: Bound in Blood is the 2009 prequel to the 2006 Western shooter Call of Juarez, centering on Ray (one of the protagonists of the original game) and his brother Thomas' exploits in their youth. After deserting from the Confederate Army shortly before its defeat, the McCalls find their old home burned down, their youngest brother William being the only survivor. To rebuild their home, the three travel to Mexico to find the legendary treasure of Juarez but William worries that his brothers are becoming outlaw murderers who only want the money for themselves...

Bound in Blood keeps the fast pace of the original, but shifts the narrative focus towards the intense Family Drama of the McCalls. Gameplay-wise, the game adds Regenerating Health and a cover mechanic, and also does away with the stealth segments from the first game. It also revamps the old concept of playing through the same level twice: you can choose to play most levels as either Thomas or Ray, as they fight together at the same time (the other is controlled by the AI). Sadly and perplexingly, there's no cooperative mode. Additionally, BiB introduces more realistic quick-draw duels.

The game was very well received, falling somewhere between a Surprisingly Improved and an Even Better Prequel, depending on your opinion of the first game, thanks to the improved graphics and gameplay mechanics and a more personal and engaging storyline.