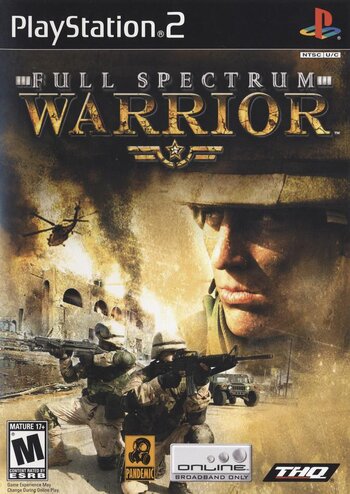 Full Spectrum Warrior is a 2004 Real-Time Strategy game made by Pandemic Studios and published by THQ. They're published for the Xbox, Microsoft Windows and the PlayStation 2.

It takes place during the US invasion of the fictional Middle Eastern dictatorship of Zekistan, some time after the invasions of Iraq and Afghanistan. After a massive wave of terror sweeping over Europe and Southeast Asia, Islamist fanatics from all over the world take refuge in Zekistan, where they are protected by the genocidal dictator Mohammad Jabbour Al-Afad. After some fruitless negotiations with the United Nations, NATO decides to nip it in the bud and launch an invasion to topple Al-Afad and rub out the terrorist stronghold.

You, the player, are put in charge of two fire teams, Alpha and Bravo, each consisting of four soldiers (a team leader, a rifleman, a grenadier, and an automatic rifleman), each with his own name and background. Your primary objective in the game is to maneuver through the narrow streets of Zekistan's capital city and defeat the militiamen hiding in the streets and houses while paying attention as not to get flanked or ambushed.

The game is notable for, despite being an RTT (Real Time Tactics) game, it is essentially a Third-Person Shooter where you don't actually pull the triggers, but are in charge of maneuvering both teams (and any escortee the mission may link you with) from cover to cover. The enemy consists mostly of Kalashnikov-wielding militants, who usually take you under fire from behind street corners or balconies.

Even tough the insurgents are poorly armed, and mostly come at you one by one, they are still incredibly dangerous shots in close quarters and will get anyone unlucky or stupid enough to not be in cover. As your units have a realistic damage model, they will go down after a shot or two. If you lose a squaddie to enemy fire, you can still save his life by collecting him and escorting him back to an earlier checkpoint. If not, you lose. If you lose two squaddies at once, you lose. If your charge dies, you lose. This, combined with your squads' relative inability to hit insurgents behind cover (a favour the AI not always returns), makes this game Nintendo Hard at some points, and falsely difficult at others.

Just don't forget; this game is more realistic and representative of modern combat than you might think...

The game is followed by a sequel, Full Spectrum Warrior: Ten Hammers.