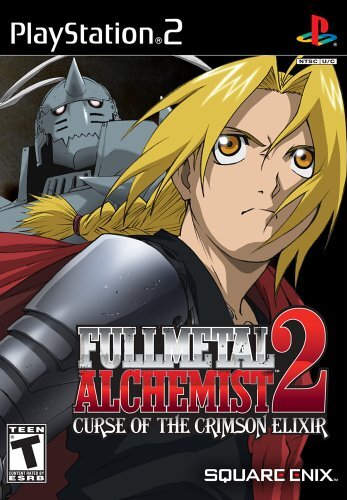 Fullmetal Alchemist 2: Curse Of The Crimson Elixir is an 2003 action role-playing game developed by Racjin and published by Square Enix for the PlayStation 2 console and is the second Fullmetal Alchemist video game released. The story penned by Hiromu Arakawa takes place at Episode 1 of the 2003 anime, where Ed and Al arrive at the desert city of Lior. Things resume similarly as the anime, until a point early on where Ed and Al encounter black monsters. That's when the plot begins to change and becomes an investigation about the spread of the black monsters.

The gameplay is a 3D beat-em-up type where players are in control of Edward with Alphonse being AI-controlled, and the combat revolves around the use of alchemy. Using a special button, Ed can transform a variety of objects into weapons, items and other objects as well as equip them with numerous enhancers. It has a role-playing mechanic, allowing players to level up by defeating enemies and earning experience.

Fullmetal Alchemist 2: Curse Of The Crimson Elixir contains examples of the following tropes: