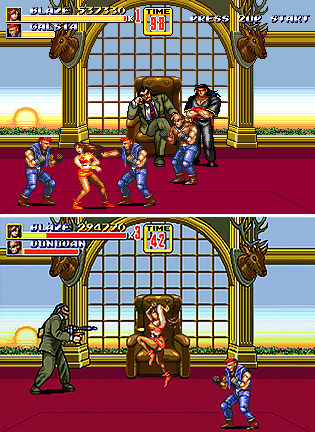 "In chess, the pawns go first."
— Magneto right before his first wave gets mowed down, X-Men: The Last Stand
Advertisement:

The Big Bad could easily step in and join the fight at any time, but instead he chooses to wait until all or at least most of their subordinate forces are defeated. Unlike Orcus on His Throne, he's not necessarily passive or staying off-camera, this is a case where he has made a conscious choice to spectate for this particular battle. A sub-trope of We Have Reserves, with the big bad or The Dragon as the reserves.

May show that the villain has no regard for his henchmen's lives and just wants to get his money's worth out of them, that he considers fighting alongside lesser forces beneath him, or that he's too overconfident to consider the heroes a threat. If he's watching from a Slouch of Villainy, it's likely to be all three. If the villain could conceivably have won if he'd stepped in earlier, he may be holding the Villain Ball.

On the other, more pragmatic hand, the villain may be letting his minions soften up the heroes while minimizing risk to himself, or taking the opportunity to observe the heroes' fighting style. Or maybe he plans to try to recruit them if they're good enough to defeat his Elite Mooks. Or maybe he uses the minions as distraction so that the villain can be free doing their main objective while the heroes are either hindered or stuck fighting the wrong battle.

Usually occurs at the top end of the Sorting Algorithm of Evil, with the Final Boss.

Compare Mook Chivalry, Flunky Boss, Run the Gauntlet, Boss Rush. Not an uncommon tactic for The Neidermeyer. Contrast Frontline General. Also contrast Just You and Me and My GUARDS!, where the character is unwilling to fight alone.