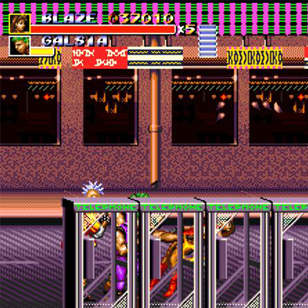 Good thing cellphones made those obsolete.
"Note we are in one of those many games where the devs thought 'Yay, cool, I'll put stuff on the foreground, it looks so pretty!' Okay, listen to me, devs: no, putting things in the foreground that block your view isn't cool, it's stupid. When showing the movie Fantasia, you won't splash a spectator's face in the middle of the screen."
— JdG (reviewing

You're walking down the streets of crime. Thugs and hooligans lurk on every corner, ready to ambush you with baseball bats, lead pipes, and broken bottles, but they are no match for your kung fu skillz. Just as long as you make sure not to end up fighting behind a sign, lamp post, or billboard.

A form of Fake Difficulty, an obstructive foreground occurs in a video game when foreground elements make the player character difficult, or sometimes even impossible, to see in a normal manner. Common in older games that did not have 3D camera angles and instead added foreground sprites for aesthetic effect, the presence of these things can be downright annoying when your character seems unable to strike the guy who's 3 feet away from them because a tree that's 30 feet away is in the view of the puppet master's monitor.

Most modern emulators have the ability to remove obstructive foregrounds. Newer games often avert this entirely while retaining foreground elements by fading out the obstruction when they think it's in the way.

Note that in some cases, Obstructive Foreground is done deliberately. Classy implementations of this will allow the player to overcome such obstructions either by minding their own placement, or by watching predictable obstacles before they are obscured and judging their position accordingly. Lesser implementations force a player to fight an enemy that has unpredictable patterns behind an opaque wall which generally devolves to simple Button Mashing.

Sometimes overlaps with Interface Screw. Compare Behind the Black.