This page covers the manga. For the entire franchise, see Franchise.Sailor Moon and for the 1990s anime see Anime.Sailor Moon. 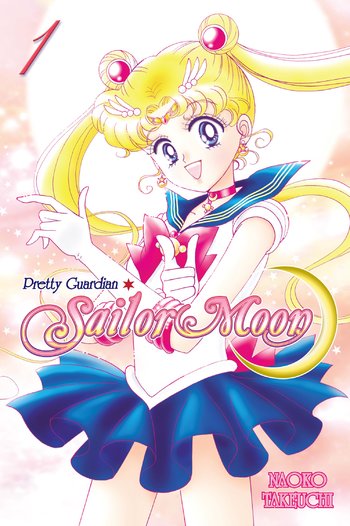 Sailor Moon began as a shoujo manga series written and illustrated by Naoko Takeuchi, which was serialized in Nakayoshi from 1991 to 1997. It chronicles the adventures of a young, clumsy and underachieving schoolgirl named Usagi Tsukino. The manga was soon adapted into a popular anime series by Toei Animation, Sailor Moon.

In the Sailor Moon manga, Usagi's life takes a turn for the unexpected when she discovers that she is the Reincarnation of an ancient lunar warrior from the Moon Kingdom. With the aid of a feline mentor called Luna, Usagi must take up the mission of defending the Earth from the various evils that threaten it while searching for the reincarnation of the Moon Kingdom's princess.

Over the course of a year, Usagi grows into her role as the Magical Girl Sailor Moon and greatly matures as a result, gathering a team of four other reincarnated warriors and realizing her true potential as both a fighter and a growing young woman. The series itself mostly follows a Monster of the Week format, with subsequent series introducing progressively more powerful villains and matching power-ups, and greatly expanding the mythos behind Usagi's past life in the Moon Kingdom and her fated future in the utopian Crystal Tokyo. The series is generally broken down into the following story arcs (not counting filler): Dark Kingdom, Black Moon, Infinity (Death Busters), Dream (Dead Moon Circus), and Stars (Shadow Galactica). Both the anime and manga end on a high note as Usagi brings peace to Earth and the galaxy.

In 2012, 15 years after the conclusion of the anime series, Toei Animation announced Sailor Moon Crystal, a Continuity Reboot premiering in 2014 on Niconico. This series adapts the manga more faithfully instead of remaking the original series.

Back when it ran under the name Mixx Comics, Tokyopop picked up the original manga as one of its first series. Their translation was loosely based off the DiC version of the anime (though some name changes were unique to it). It was filled with inconsistencies and was flipped so that it read left-to-right, a then-common practice of US manga localization. Besides the questionable translation, Tokyopop's release was also criticized for its poor print and binding quality. (It is rare to find one of these volumes in good condition.) All of their releases went out of print in 2005. Kodansha USA announced in 2011 that they had picked up Sailor Moon and Codename: Sailor V (see below), and would be using the 2003 Japanese reprints as the base for a new printing of the series. Their editions retain the original right-to-left format and use an all-new accurate translation (though it has been frequently criticized for being too literal). In 2014, Kodansha in Japan began releasing brand new editions of the manga with even more updates and alterations.

The manga has a prequel of sorts in Codename: Sailor V. The first issue was released before Sailor Moon, but the series itself finished after Sailor Moon ended. A pilot for an aborted American live-action/animation blend adaption also exists – a company called Toon Makers pitched this to Toei instead of a dub, but since Toei didn't pick it up, a two-minute music video put together using footage from the pilot remains the only footage ever seen by the general public. You can find more information on this project at Toon Makers’ Sailor Moon.

This page has a character sheet; please put character-specific tropes there instead of adding them here. It also has a recap sheet.

Owing to the stupendous number of tropes associated with this work, we've split the trope listing into three separate pages. They contain examples of:

Sailor Moon is the trope namer of:

Example of:
Eat the Camera