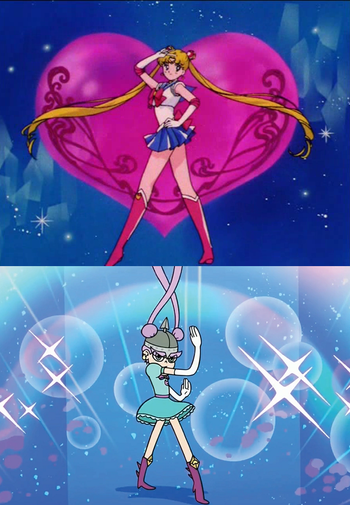 "In the Name of the Moon, I will copy you!"note Top: Usagi Tsukino, Bottom: Mina Loveberry
Advertisement:

Sailor Moon is a manga series widely regarded as one of the defining Shoujo series of The '90s. Not only did it kickstart its own multimedia franchise, but it also codified several Magical Girl Warrior and Shoujo tropes and thus largely remains in the public consciousness. As a result, there are quite a few characters that reference, homage, or parody its main cast, the Sailor Senshi, especially its protagonist, Usagi Tsukino/Sailor Moon.

The Sailor Senshinote variously translated as "Sailor Warrior", "Sailor Guardian", or "Sailor Soldier"; the DIC translation used the term "Sailor Scout" are young, female Magical Girl Warriors themed after their respective celestial domains — there's (at least) one for every planet, plus Pluto and the Moon — who battle several cosmic foes. Common tip-offs that a character is based on the Sailor Moon cast include:

Sub-Trope of Fountain of Expies. Not to be confused with Sailor Earth, which is named for a common Sailor Moon fandom way of creating an Original Character. See also Stock Shoujo Heroine.

Note that this is specifically for characters themed around the senshi — for other references to the franchise, go to ReferencedBy.Sailor Moon. For another commonly-parodied anime franchise, see Phonýmon.