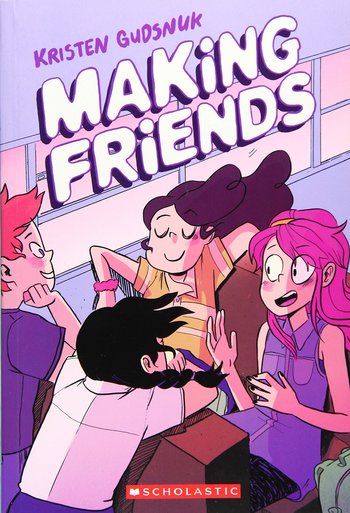 Making Friends is a graphic novel by Kristen Gudsnuk (Henchgirl)

The story follows a girl named Danielle "Dany" Radley who recently started the 7th grade, but is having trouble fitting in. The friends she used to hang out with are in different classes and not in the same lunch period and she feels like she's growing apart from them. Things change when her aunt Elma passes away and the family rummage through her house for anything valuable. Dany finds a batch of sketchbooks and manage to claim one (after her greedy aunt and uncle snatch up the majority of them). While milling around in her room, she sketches one of her favorite anime characters in and finds that it brings him come to life, revealing the sketchbook to be magical. Deciding to push her luck a bit, she creates a friend of her own, Madison Fontaine, a super cool friend from New York.

Naturally however while it seem like a good idea on paper, she soon begins to realize the consequences of the power she now wields, while at the same time starts to realize her own self-worth as a person.

Released in 2018 by Scholastic. It got a sequel in 2019 subtitled "Back to the Drawing Board" in which Dany gets into further shenanigans when she tries to makes a duplicate of herself to help with her schoolwork. And things getting more complicated when a magic dog runs amuck through town.

A third and supposedly final book, Third Time's the Charm was released in August 2021. This one follows up on a plot point in the second book of Danny's notebook going haywire after she tried to make a duplicate of it after her mother took it away from her. The book somehow transport Dany and Madison into alternate world where the two are now twins and attending a prestigious school where they meet another girl, Amara. The two have to find out what's going on an set things back to normal. Here's a preview