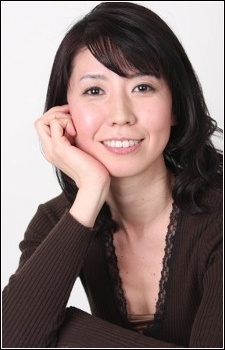 Heil, Ilpalazzo! For love and justice, I am the legendary Kotono Mitsuishi! In the name of the moon, I'll punish you, chu!
Advertisement:

THE LEGENDARY KOTONO MITSUISHI!... is a lady, born on December 8, 1967 in Toda, Japan, who voiced both the title character of Sailor Moon and Major Misato Katsuragi in Neon Genesis Evangelion. Widely seen as an "oneesan" in the industry. Another strong point of hers is that not only that she does Onee-sama roles, she does Genki Girl roles just fine... or maybe too fabulously, proven in Excel Saga whereas she makes full use of superb Motor Mouth skills. She's definitely a Woman of a Thousand Voices.

She was classmates with Toshiyuki Morikawa from the same voice acting school. Her characters seem to have close relationships with those voiced by Houko Kuwashima, from Murrue/Natarle in Gundam SEED to Mireille/Kirika in Noir to Jean/Clare in Claymore.

Because she really plays a lot of different roles, it's really hard to pin point who her western counterpart is, since her roles have been played by many different dub voice actresses, such as Jessica Calvello (Excel in the first 13 episodes of Excel Saga and Mink in Dragon Half), Allison Keith (Misato Katsuragi in Neon Genesis Evangelion), Shelley Calene-Black (Mirielle in Noir), and Stephanie Sheh (Sailor Moon in the Viz Media dub of Sailor Moon). However, she has dubbed twice for Sarah Michelle Gellar's roles (Cruel Intentions, I Know What You Did Last Summer).

Some of her roles (and more Fanservice) include: