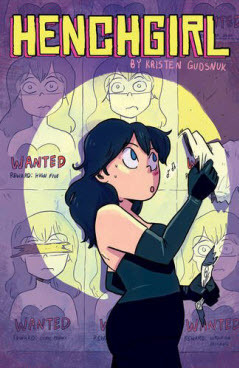 The villain with a heart of gold.
Advertisement:

is a comic drawn by Kristen Gudsnuk.

Crepe City, a city once vaunted for its pancakes, now a warground between heroes and villains. One such group of the latter is the Butterfly Gang, a small band of criminals led by Monsieur Butterfly who seek to make a name for themselves. Among his group is the titular henchgirl, Mary Posa, who joined thinking it was a landscaping job but came to settle into the criminal life. However, she also wishes for a better life— but the question is, can she do so or is the life of a henchgirl truly her calling?

Started in 2013 as a self published book, Kristen decided to put it up online after the release of the fourth issue. The comic eventually came to an end in Dec 2016. Near the end of its run, Kristen revealed that Dark Horse picked up the comic and will be publishing the collected edition (which will have extra material). However in respect of that, she removed that latter half of the comic beyond the fourth issue in the webcomic version (ironically) and announced the site will soon die off on its own which it eventually did. So please support the book where available.

If you're following along with the webcomic, the final page is posted here.

In June 2019, Kristen revealed on Twitter that the series will be adapted into a TV Series

. The show is in development for Freeform (the former ABC Family)

, with Alex Ebel adapting, Lindsey Shockley (an executive producer of black•ish) as showrunner, and The District (the production company behind Stumptown) and Scout Comics producing.

Dark Horse re-released the trade paperback on September 16, 2020, with new cover art and 16 pages of new comics seeing what's happening with Mary and the other denizens of Crepe City.

Has a character page. Please contribute.