Webcomic / He Is a Good Boy 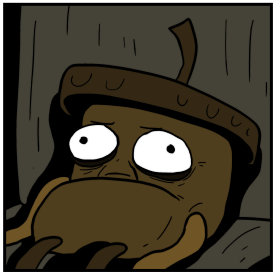 pictured: Crange, not actually a good boy at all
Somewhere in an anthropomorphic society of insects, rocks and other creatures known as Bugworld lives Crange, an acorn with a drinking problem, a lack of morals, and no interest in moving forward with his life. After losing the tree that served as his parental figure and home, Crange’s life takes a turn for the weird, getting into situations ranging from run-ins with bug werewolves and murderous “artists” to kidnappings by thieves and making deals with the Devil — and as it turns out, there's more to those isolated incidents (and Crange himself) than it seems.
Advertisement:

He Is A Good Boy is a webcomic by KC Green (who previously created Gunshow and concurrently wrote BACK with fellow artist Anthony Clark). Running from 2015 until 2019, HIAGB can be found here

. Be warned: the copious gore and some of the humor regularly makes it Not Safe for Work.

to release the collected comic as a graphic novel in 2020.