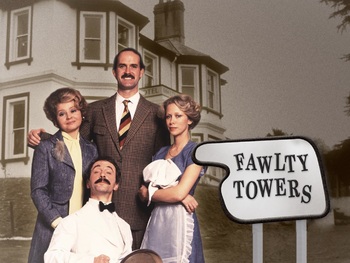 "Please allow me to introduce myself. I am the owner of Fawlty Towers. And I would like to welcome your war, your wall, you all..."
— Basil Fawlty
Advertisement:

A classic Britcom, created by John Cleese and Connie Booth and originally airing on BBC2 for one series in 1975 and another in 1979, which centres on Basil Fawlty, a bad-tempered snob who runs "the crummiest, shoddiest, worst-run hotel in the whole of Western Europe".

One of the all-time great TV comedies, Fawlty Towers benefited greatly from its cheerful willingness to create utterly horrible human beings and let them act according to their nature at all times; the show takes a particular joy in never allowing the viewer to forget what a despicable person Basil is — he hardly ever gets a Pet the Dog moment, and even when he does it's quickly undone by multiple Kick the Dog moments in rapid succession.

The series was intelligent, effervescent and daring, and the only real complaint one can make is that there wasn't enough of it (only 12 episodes were ever made). It also benefits from a terrific Ensemble Cast, including Cleese as Basil; Prunella Scales as his calmly domineering wife, Sybil; Booth as the hotel's thanklessly levelheaded maid and waitress, Polly Sherman; and Andrew Sachs as the cheerful but bungling Spanish waiter Manuel.

In 2000, the British Film Institute declared it the best British television programme ever made. A few years ago, it was voted best UK sitcom ever in a poll, and J. Michael Straczynski said in a book on screenwriting that if a writer watches Fawlty Towers and The Mary Tyler Moore Show, they will have had the best possible grounding in how to write comedy.

There were three attempts to adapt the series in the U.S., none of which proved successful. The first was Snavely, a 1978 pilot starring Harvey Korman and Betty White that aired on ABC but failed to get picked up as a series. Then there was Amanda's in 1983, also on ABC, which starred Bea Arthur as a female Fawlty expy and was pulled after ten episodes. Finally, in 1999 CBS attempted to refashion the premise into a John Larroquette vehicle called Payne (after Larroquette's character, "Royal Payne"); it only lasted nine episodes.

Among the show's many fans are Rowan Atkinson and Richard Curtis, who declared Fawlty Towers the be-all, end-all accomplishment in Britcoms set in contemporary times, which convinced them to make their own acclaimed Britcom a period piece.