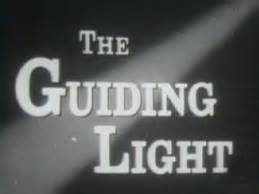 There is a destiny that makes us brothers, none goes his way alone. All that we send into the lives of others, comes back into our own.
Advertisement:

The single most important thing about Guiding Light is this: it may be the longest recorded continuous narrative in the entire history of mankind. If you wanted to experience the entire show from beginning to end, and you could do so on a 24-hours-a-day schedule with no breaks, you would need around eighteen months to get through it all. With all that said, you may be curious as to what the show is about. Recapping that is not going to be an easy task, but damned if we won't try.

Inspired by creator Irna Phillips' nights listening to a radio preacher, The Guiding Light began as a character study of Chicago-based Reverend John Ruthledge and his foil, the pessimistic Ellis Smith. Succeeding preachers, all with the Ruthledge name, have carried on the work of their progenitor. The 1950s (and the transition to television) saw the families move to the Los Angeles area, where the focus shifted to the Bauers, a clan of German immigrants who believed staunchly in the American dream. Filling in for cranky Ellis Smith is Bertha "Bert" Miller, a materialistic harridan who opposes the Bauers' work ethic at every turn. The Bauer family would eventually become the tentpoles of the series from here on out.

The 1960s brought forth a couple of minority actors (including a pre-fame Billy Dee Williams) and a host of contemporary issues. Without any fanfare, the show returned to the midwest, with "Los Angeles" retconned into "Springfield, U.S.A" — your standard, all-purpose midwest locale (which should be familiar to anyone who has watched American soaps). Nothing so earth-shattering occurred over the course of the 1970s, apart from the show's patriarch, Bill Bauer, being very thoroughly killed off and then mysteriously resurrected. The 1980s were...more tumultuous (complete with a disco intro sequence — in 1981): The aging Bauer clan and the working-class Reardons took a backseat to a younger, hornier cast, though they would make a comeback in the 1990s.

Like most soap operas during that period, the storylines got a bit more tangled and outrageous, though nothing anywhere near the realm of Days of Our Lives' cloak-and-dagger intrigue. About the craziest thing to happen on Guiding Light was a multiple-personality diagnosis. The last years of the show's life were rocky, despite an extensive retool and modernization of the Springfield sets. Four of the veteran players, including the oldest living Bauer (Dr. Ed Bauer), were retconned into accessories to a murder that happened way back into the 1970s, when they were still straight-laced young men. The new millennium was now upon us, along with rapes, mobsters, psychics, and ghosts galore. Despite fan outcry and the outright revolt of one actor, the show eventually did come back to earth, if just so it could tidy everything up with a bow for the Grand Finale.

Since Guiding Light was a daytime Soap Opera, not all of the material that makes up the exhaustive narrative is known to exist. Not much survived from either the radio years or the first 25 years or so of the TV series; what does exist is in the form of kinescopes

, home video recordings, and (in the case of the radio years) vinyls.

For a far more detailed look at the entire run of the series, the Other Wiki has you covered.