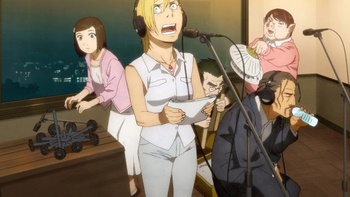 Despite seeing Minare's amazing face, she's doing a radio drama gig with the other people in MRS Radio.
Advertisement:

Of all the influences on the early days of television, none were so direct and widespread as Golden Age radio.

The dawn of commercial radio began in 1920, with the first commercial stations, but little can be confirmed before 1926 since few authenticated recordings exist. It was in 1926 that NBC made its first broadcast, initially as the separate "Red" and "Blue" networks. Early broadcasts were primarily news or sports-related, but The Happiness Boys, a vaudeville duo, began a show in 1921 which continued until 1940. The "Golden Age" proper began around 1929. NBC was soon joined by CBS.

Probably the most notable single event to happen during the Golden Age of radio was the episode of The Mercury Theatre on the Air which aired on October 30, 1938. Director Orson Welles headed production of Howard Koch's adaptation of The War of the Worlds. At the time, newspapers claimed the faux-newscast format (of the first two-thirds of the show) caused nation-wide panic. The resulting chaos is probably the reason that all subsequent US mockumentaries carry numerous disclaimers. It also prompted one of the first serious studies of mass media, The Invasion From Mars: A Study In The Psychology Of Panic by Princeton professor Hadley Cantril; Ironically, both the news reports of the time and much of Cantril's resulting conclusions have been called into question in recent years; still, the event was key in the launch of mass communication studies as an academic field.

Many of the Golden Age radio dramas eventually made the move to television, and several co-existed on TV and radio. But by the mid-1950s, televisions were becoming commonplace, and radio went into a decline. Most authorities agree that the "Golden Age" ended on September 30, 1962, with the final episodes of Suspense and Yours Truly Johnny Dollar.

Most Golden Age radio dramas suffer from some percentage of missing episodes, but, at least after the earliest days, these are surprisingly uncommon: Audio recording was cheap and the technology highly available, so recordings of the 1930s and 1940s Radio Drama are available in much greater supply than their television contemporaries.

The advertising structure for Golden Age radio differed greatly from modern television. Shows typically had a single sponsor, which provided all the advertisements for the show. Actors would occasionally deliver in-character endorsements of the sponsor's product. As a result, an account could dry up, leaving the show commercial-free while the network "sustained" it. A perfect example of both items was again The Mercury Theatre on the Air which ran for a period on the network's own expense until the "The War of the Worlds", made such a sensation that the Campbell's Soup Company jumped at the chance to sponsor the series, which led to it being renamed The Campbell Playhouse. Economic forces being what they were, advertisements were almost always for consumable products (that is, automakers and long-distance carriers need not apply), such as gum, wine, and soap (which was mostly advertised during daytime dramas, leading to the term "Soap Opera"). One side effect is that almost all recordings of Golden Age radio drama available today still include the original commercials.

Another memorable feature of radio dramas was premium merchandising

, usually a tie-in to both the show and the sponsor's product. An entire plot thread could be built around the use of the premium. One sent in three box tops and a dime, or the seal from under the Ovaltine lid, etc. Little Orphan Annie's Ovaltine shake-up mugs and Captain Midnight Code-O-Graph badges are some of the best known.note While there were plenty of rings being offered, most "Secret Decoder Rings" were actually badges with cipher disks. An actual decoder ring was offered on Jonny Quest in the 1960s. Premiums weren't limited to kids; soap operas offered Helen Trent Friendship Necklaces and Ma Perkins Cookbooks.

It may also be worth noting that Golden Age radio shows tended to run much longer than television shows. The longest-running radio show was Amos And Andy, which began life in 1926 on NBC Blue under the title Sam and Henry. It ran until 1960. The comparative ease and cheapness of production may have been a contributing factor (not to mention the fact that, lacking precedent, no one knew that 20 years was a long time for a show to run). However, since the audience didn't have to see the actors, it was easy and common to pull off a The Other Darrin (Yours Truly Johnny Dollar went through six actors in the title role plus two more in audition episodes).

Radio Drama persists to this day, but only as a shadow of its former glory, mostly for nostalgia purposes. A brief revival in the 1970s led to shows such as Zero Hour, General Mills Radio Adventure Theater, a Fantastic Four radio show, National Lampoon Radio Hour (which was a predecessor to Saturday Night Live), the NPR production of Star Wars, and the best known series of that era, CBS Radio Mystery Theater. In the 21st Century Podcasts that do fictional stories fill much of the same niche as Radio Drama.

Today, in the United States, most radio dramas are one-off or miniseries events. The few exceptions may be found in one of two broadcasting niches. The first is public radio; of these, by far the best-known example is A Prairie Home Companion (now known as Live From Here), a long-running variety show formerly hosted by Garrison Keillor. The other place on the dial to find radio drama is Christian radio. Two notable examples are Adventures in Odyssey, which has been telling its stories of life in Odyssey (a prime example of Everytown, America) since 1987, and Unshackled!, an anthology/docudrama produced by the Pacific Garden Mission (the oldest Christian rescue mission in the US) which has been on the air since 1950. Both are thriving in the new millennium.

The BBC also produces a number of these on the other side of the pond, the best known of which is the original incarnation of The Hitchhiker's Guide to the Galaxy. Free from the financial constraints of commercial networks, The BBC continues to broadcast regular dramas on two of its national networks (which have included adaptations of The Lord of the Rings, His Dark Materials and Discworld novels), and has also set up a digital channel, BBC7 (later BBC Radio 7; as of 2012 known as BBC Radio 4 Extra), as an outlet for archive radio drama and comedy. They also continue to broadcast one of the longest-running Soap Operas in the world, in the form of The Archers, which began as a thinly disguised farming advice broadcast, and has been running continuously 5 days per week since 1955. SiriusXM Radio has a channel dedicated to reruns of classic radio Dramas, mostly from 1938-1960, though they also get some of the Harry Nile adventures.

Most of the Formats and genres, as well as many Tropes that are Older Than Television, originated on radio, especially: