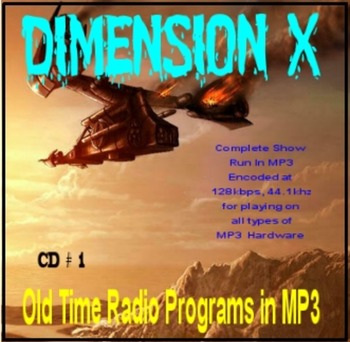 Broadcast on the NBC radio channel from 1950–1951, Dimension X was a Science Fiction Radio Drama aimed at adults. This Genre Anthology would air new half-hour episodes weekly. Stories would often be adapted from the top science fiction writers of the day, and many of its episodes were later recycled by its successor, X Minus One. NBC would later partner with Street And Smith, gaining the license to adapt stories from Astounding Science Fiction, giving it an edge in popularity on competing radio shows.

The series was directed by Fred Wiehe and Edward King, and spanned a total of fifty episodes (four of which were repeats). Most of the scriptwriting was by Ernest Kinoy or George Lefferts, either by adapting or creating new stories specific for Dimension X.

, who have uploaded it to The Internet Archive

, as well as having it available for sale in their "catalog".