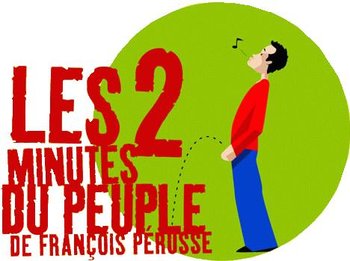 Les 2 Minutes du Peuple ("The 2 Minutes of the People") is a series of comedic radio skits by Quebecois humorist François Pérusse. Its Quebec French version debuted on radio in 1990, and its French version in 1996. In Europe they ended in 2012, while in Québec they "ended" in 2016, only to be followed by a virtually identical Spiritual Successor called "Pérusse Express" (which slightly focuses more on news both local and worldwide).

Each skit is about two-minutes long, and tackles subjects such as everyday situations, the life of historical characters, current events, and parodies of TV shows, game shows, songs, and celebrities. The series dialogue is a never-ending Hurricane of Puns mixed with some Surreal Humor, and is most remembered for its sped-up high-pitched voices, which enforced its Rapid-Fire Comedy.

The series has received numerous awards, and has become a staple of Francophone culture. It has notably been parodied or referenced by numerous Audio Plays.