Every Man Has His Price 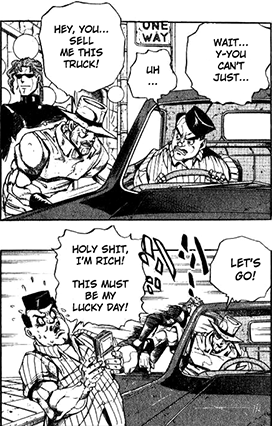 "A man with 'principles' is just another way of saying 'he can't be bought cheap'."
— Chester Hoenicker, Flubber
Advertisement:

This occurs when a character or group of characters in a narrative are repeatedly able to use their money as "persuasion" for anyone in their way, with little to no resistance from those being bribed. Whether it's getting past the guards at the Supervillain Lair or retrieving vital information from the local townsfolk, these characters always find that money is the universal negotiator. This act of shameless coercion is obviously based on the Stock Phrase and heroes and villains alike, it seems, are never shy about finding out what "every man's" price is.

Since large sums of cash can be required for their bribes, it is common to see a character pull out a Briefcase Full of Money when invoking this trope, but this is certainly not required. It is not required that the bribes involve actual cash either, and they can include anything from delicious candy to gratuitous sexual favors.

Note that this trope does not mean a character simply bribes someone during the plot threads. It is only indicative of characters who frequently use bribes to coerce others with impunity. Particularly horrendous abusers of this trope show characters that can regularly bribe their Mooks or other characters to do damn near anything, even with situations where the payment would certainly not be worth the risk or loss (such as jobs with a near-guarantee of death or dismemberment).

A subtrope of Screw the Rules, I Have Money!, although the character doesn't necessarily have to be richer than anybody else.

Compare Buy Them Off, where a character attempts to use a form of bribery to atone for evil actions, and Villain with Good Publicity, for characters who take bribery, coercion, and fraud to a whole different level. Contrast Bribe Backfire, which is what happens when the briber underestimates the price and/or integrity of his/her target and Money Is Not Power, where the situation may be bad enough (or the person is driven enough) that whatever "the price" may be, it is not possible to pay with money (and most certainly will doom a "rich" character).

"I heard you can customize your own lightsaber..."

"I heard you can customize your own lightsaber..."