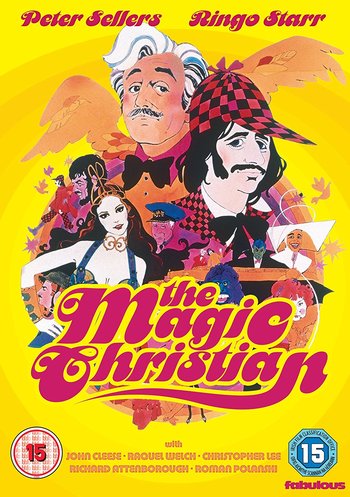 The Magic Christian is a 1969 film based on Terry Southern's 1959 book of the same name, starring Peter Sellers and Ringo Starr. Before you ask, the name is taken from a boat, and has nothing to do with magic Christians.

Sellers plays Sir Guy Grand, a billionaire who wants to have some fun. He adopts the homeless Youngman Grand (Ringo Starr), and together they set out to see what lengths people will go to for money. The answer is, pretty far.

Features cameos by Graham Chapman and John Cleese (who also wrote additional material for the script), before Monty Python had really taken off. Spike Milligan also appears, in a suitably surreal scene, alongside fellow Goon Sellers.