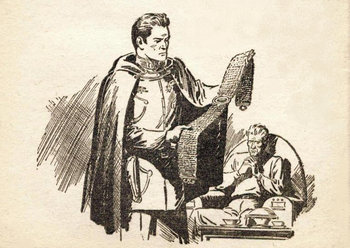 General Riose inspecting evidence for the "magicians".
BEL RIOSE... In his relatively short career, Riose earned the title of "The Last of the Imperials" and earned it well. A study of his campaigns reveals him to be the equal of Peurifoy in strategic ability and his superior perhaps in his ability to handle men. That he was born in the days of the decline of Empire made it all but impossible for him to equal Peurifoy's record as a conqueror. Yet he had his chance when, the first of the Empire's generals to do so, he faced the Foundation squarely....
— ENCYCLOPEDIA GALACTICA, 116th edition, published in 1020 F.E.
Advertisement:

First published as "Dead Hand" in Astounding Science Fiction (April 1945 issue), by Isaac Asimov. This Science Fiction Novella takes place after the events of "The Merchant Princes" and in 1996, it earned second place in the 1946 Retro Hugo Award (losing to "The Mule"). After many decades of growth, the Foundation has expanded near enough to the borders of the shrinking Empire that they've been noticed. Despite being only a quarter of its previous size, the Empire is still much larger than the fledgling Foundation. How can the dead hand of Hari Seldon defeat a living will?

General Bel Riose, banished to the edge of the Empire, is the Military Governor of Siwenna. Siwenna appeared in "The Merchant Princes", where Hober Mallow visited Onum Barr. General Riose is visiting Onum's son, Ducem Barr, who is now an old man. Barr convinces Riose of the existence of the Foundation, a galactic nation who are foretold to conquer the galaxy. In disguise, General Riose travels there and confirms much of what Barr told him. So, to defend the great Galactic Empire (and to engage in the glorious war that he wants), Riose announces a campaign against the Foundation with ten massive Empire ships.

During one of the first attacks into the Foundation, an independent Trader called Lathan Devers is captured and interrogated: Devers affirms that he does not care much about politics. However, when left alone with Barr, Devers shares his actual plans with the man: he's a spy sent to supply false information to Riose, find information on him and do anything he can to disrupt his plots.

Riose's reports reach Trantor and Emperor Cleon II, which results in Privy Secretary Brodrig being sent to keep an eye on Riose. Brodrig bribes Devers, who lies to him by telling the Privy Secretary that Riose seeks the Imperial throne, which he may be able to achieve by using the Foundation's advanced technology in his favor.

A few days later, Riose meets again with Devers and Barr and reveals that Brodrig's throwing his full support behind Riose, the opposite of what Devers had hoped. Riose states that, after weeks of requiring each planet to be hard-won and that all of them maintain a constant resistance, led by the merchants, he suspects there is more to Devers than thought. Barr knocks Riose out and both Trader and Siwennian escape on Devers' ship. Devers, knowing that time is running out for Terminus and Siwenna (as most of the planet is getting ready to rebel the moment the Empire loses power in the region), proposes a risky plan: go to Trantor and use Riose's actions to convince the Emperor that the General and the Privy Secretary are plotting to take over the Empire.

After several weeks of using Brodrig's money to bribe successive levels of bureaucrats, though, one of them turns out to be a member of the Secret Police and tries to arrest them. Devers and Barr escape just in time - learning as they do so that Cleon II has had Brodrig and Riose arrested and executed.

With the end of the war, Siwenna rises up against the Empire and joins the Foundation, while Devers and Barr are decorated for their (unnecessary) efforts. Barr then explains the reason why Riose would have failed: had he been a weak general, he wouldn't have had any success. Had he been a strong general, but the Emperor a weak man, then he would have gone after the throne. Cleon was a strong Emperor, though, so Riose could only project his power outside the Empire - but Cleon was a strong Emperor because he suspected anyone that had enough power to begin to rival his, so when Riose and Brodrig became too powerful, he had them both executed to secure his throne.

In 1952, "The General" was revised and included as the first half of Foundation and Empire. Not to be confused with The General Series, another retelling of the 6th century Eastern Roman Empire (also known as the Byzantium Empire) campaign by Flavius Belisarius.

"The General" provides examples of: