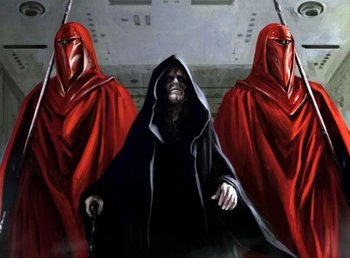 To be fair, this guy is a powerful Force user, but he could probably be felled by a stiff breeze.
He is the master of mankind by the will of the gods, and the master of more than a million worlds by the might of his inexhaustible armies.
He is a rotting carcass writhing invisibly with power from the Dark Age of Technology.
— From the intro blurb to Imperium-focused Warhammer 40,000 novels
Advertisement:

In most works, the leader of The Empire is powerful in their own right, especially when Authority Equals Asskicking in their realm.

Not with this one.

They may be very old, or crippled, or ill, or some combination of the three. A slight breeze looks like it could kill them. Either way, they do not cut an imposing figure in person. They may be incredibly competent in internal politics, but they don't do anything except be Orcus on His Throne because, well... they look like they can barely get off it. Sure, they might have been The Conqueror in their younger days, but those days are long gone by. Bonus points if there appears to be some sort of cult worshiping them or the reader is repeatedly told In-Universe accounts of how amazing or impressive they are.

The key to being this trope is that despite how decrepit or powerless they may be physically, the state or authority they are at least nominally the head of is decidedly not, and defying it is no laughing matter in the setting. Also, if the setting includes magic or some equivalent to it, this guy could very well be extremely talented in its use and legitimately capable of defending himself with it, though anyone who can get around said magic will probably have no problem with assassinating him.

Compare Dark Lord on Life Support, Weak Boss, Strong Underlings, Puppet King, and The Man Behind the Curtain, with which this trope often overlaps.