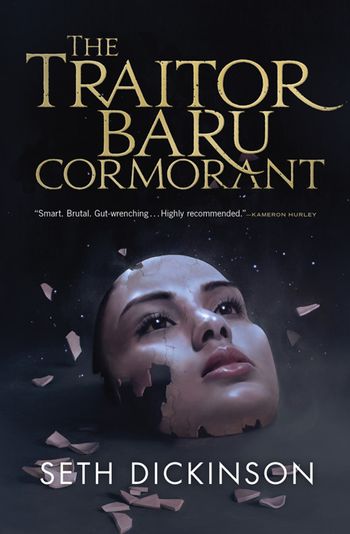 "Any price. Any sacrifice. It is the only way to take a piece of their power for our own."
Advertisement:

Previously known for numerous short stories on science fiction and fantasy magazines, his work with the Freespace mod Blue Planet, and Destiny's Grimoire, Seth Dickinson's debut novel is an extension of his short story "The Traitor Baru Cormorant, Her Field-General, and Their Wounds", which has been adapted as the novel's concluding chapter. Do not read this short story if you plan on reading the book, as this short story spoils the novel in full.

Armed with science, economics, and bureaucracy, the Imperial Republic of Falcrest, or the Masquerade as it is called by its detractors, slowly conquers Baru Cormorant's seaside homeland of Taranoke. Baru, lured away by the Empire's promise of a more prosperous society, watches from within the Imperial academy's walls as the Masqerade rewrites Taranoke's culture and criminalizes the island's customs. However, Baru is a savant, talented with the calculus of numbers and power, and she sees that the only way to defeat the Masquerade is by changing it from within.

While the Empire dismantles Baru's island society, Baru dives headlong into Masquerade education, where her talents catch the eye of an Imperial agent. After her graduation, she is selected for an exceptional post as the new Imperial Accountant for the recently conquered feudal nation of Aurdwynn, a powderkeg of sedition and rebellion. In order to earn the power that will free her people, Baru must navigate Aurdwynn's treacherous politics while keeping her true motives and her sexuality hidden, and in doing so learn that the price of liberation will be exacted on her conscience.

The sequel, titled The Monster Baru Cormorant, was released in October 2018.

The following tropes have been found in this work: